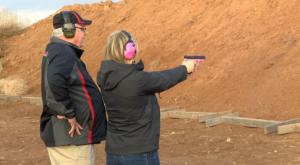 Lubbock license to carry instructors are seeing a spike in people signing up to get their certification since open carry took effect.

At On the Mark, a provider of LTC and CHL certifications, CEO Ray Dunn said his classes have been booked up into February.

“There’s a huge spike in every CHL, LTC class in Texas probably because of the open carry law,” Dunn said. “I suspect that they’ll all be overflowing all year long.”

Husband and wife Stevan and Ashley Vergara said they took the LTC course for protection.

“We have two young children and [my husband] works a lot, he’s gone a lot so a lot of the times it’s just me and the kids,” Ashely Vergara said. “I want to have the ability to protect me and my children should the need arise.”

The first steps in getting a LTC in Texas requires six-hours in a classroom with a written exam and a shooting proficiency test at a gun range.
On the Mark takes their training a step further by offering laser shooting simulations during class.
Dunn said they’re the only LTC course that offers simulated training in Lubbock.

“Doing the laser training as part of it is really where it’s at,” Dunn said “It’s not just getting the license and being able to walk down the street concealed or unconcealed. It’s knowing what to do with it after you get it and that’s what we focus on, knowing how to make the judgment calls of when you should and when you should try to talk somebody down, because ultimately that’s the best thing.”

After you pass the LTC certification course people have to submit to a background check and fingerprints.

On the Mark training specialist Craig Mann said he’s confident that On the Mark is sending LTC holders out on the streets who know how to carry responsibly.

“We believe in what we’re doing,” Mann said. “We believe wholeheartedly in everything that we do, we put people out in the field that can save someone’s life or save themselves.

Watch the full video on EverythingLubbock.com.